December 15, 2014
Jack Strandburg is a transplanted Texan so it's really no surprise that his debut novel was a good old fashioned off the wall western-humor. Hustle Henry and the Cue-Ball Kid, brought to you by Solstice Publishing was spawned from one of his all-time favorite movies, Butch Cassidy and the Sundance Kid. Henry and Cue-Ball, as the names suggest, make their living not by robbing banks but by hustling at billiards. The book takes place in the Old West, circa turn of the 20th century. Originally he wrote the book in the 1980’s just for fun. He never dreamed this would be his first published novel. Once it was accepted, he made it his mission to research and ensure the writing reflected the time and place 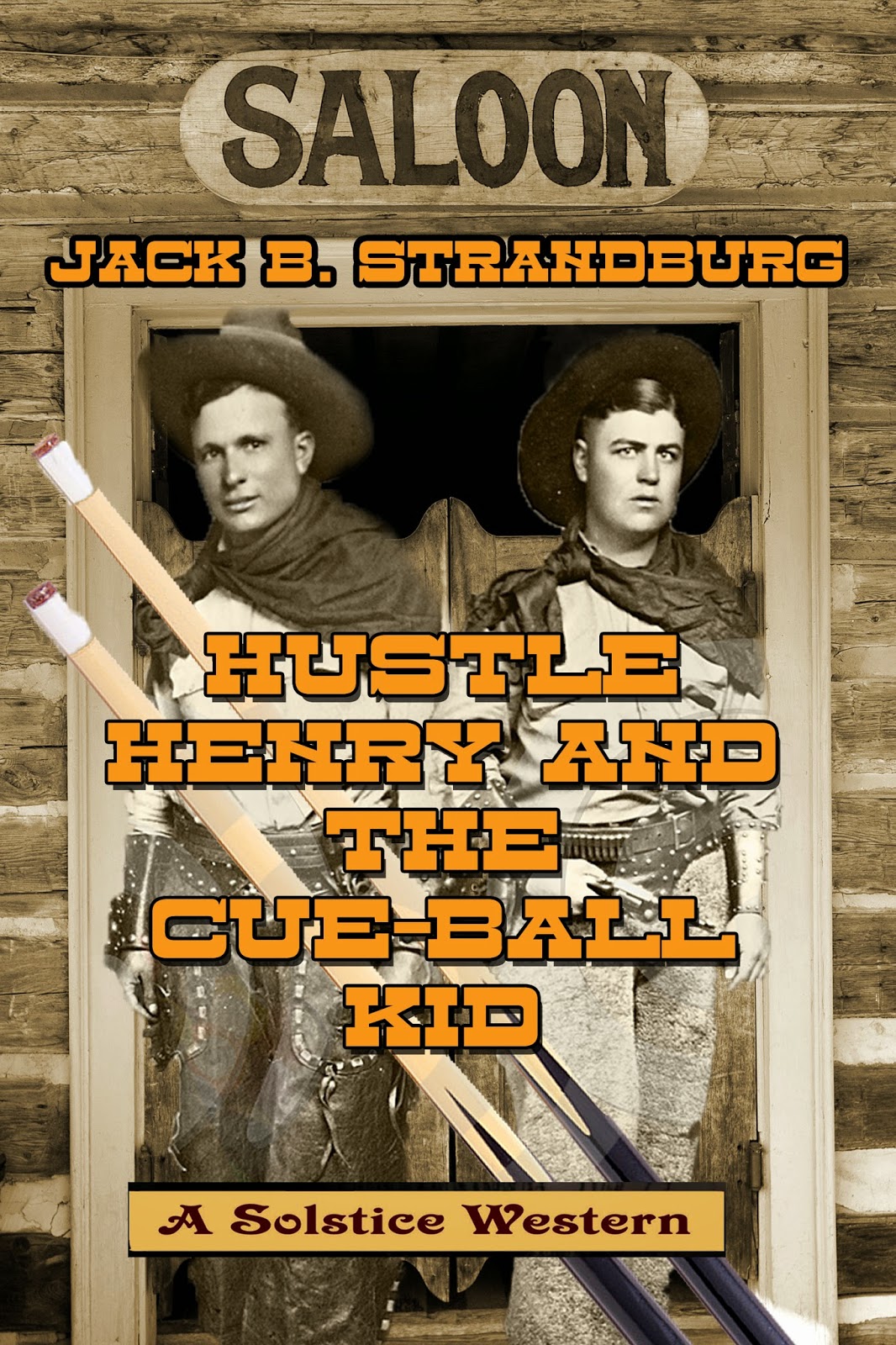 Thank-you for joining me Jack.

Given my interest in science fiction and fantasy, I always like to ask people where and when they would go if time travel was possible. Would you head to the Wild West? And if so what sort of occupation would interest you? I would love to travel to the Civil War era. The history and the battles have always interested me and I've seen several movies. One of the items on my bucket list is to visit Gettysburg, not just because of the history but also because I love paranormal and ghost sightings. I think it would be fun to actually be witness to a ghost sighting, although I can’t be sure how I would react if it actually happened.

I love paranormal as well, maybe you should dabble there next novel. You said that you originally wrote the book in the 1980's. I was actually born in 1980 so I have a lot of fond memories from that decade. Ghostbusters, Cabbage Patch Dolls, Nintendo and Ninja Turtles to name a few. What is your favourite and least favourite fad of that time? I got into playing Atari video games and I still enjoy watching Ghostbusters. My son was heavy into Ninja Turtles (okay, I’m dating myself because my daughter was also born in 1980). I found Miami Vice with Don Johnson annoying and although I like women, never actually watched the Charlie’s Angel’s TV show. I also never had enough patience to solve Rubik’s Cube.

Are you going to stick with the old west or dabble in other genres? I am currently rewriting my first mystery, originally written in the 1990’s, and working on several solid short story ideas in the mystery genre. I will likely stick with mystery because that’s what I enjoy doing the most.

I love mystery. The second book in my Temple of Indra series, Curse of the Purple Delhi Sapphire is a mystery thriller. Can you tell us a little bit about your latest book? What is your favourite scene? My mystery is titled A Head in the Game and started from a creative writing exercise which suggested, “imagine you are standing on a crowded street and someone walks up to you and hands you a bag.” My favorite scene is the first meeting between the protagonist and antagonist, although at the time, the antagonist’s role isn’t clear. The antagonist constantly answers a question with a question and won’t stay on topic. Sarcasm and subtle insults are frequent.
Heather Graham is one of my fave authors. She writes paranormal as well as mystery. Who is yours? My two favorite authors at this time are Harlan Coben and Tess Gerrittsen. I was fortunate to receive an autographed copy of one of Mrs. Gerrittsen’s books.
Now I'm going to put my author hat on and ask you some of the nerdy business questions we authors like to ask. What would you say is the most challenging part of writing a book?  I often struggle to get started since I am an impatient perfectionist. I constantly battle with the need to write a flawless first draft. Once I do get going on a project, particularly novel length, deciding which plot point and path to follow often keeps me up at night. I consider myself lucky because I never lack for ideas or characters. This happened with my current mystery novel. I came up with additional characters and plot points which I know will improve the story, and is the reason why I am rewriting instead of revising.

Tell us about the publishing process. Was it easier or more difficult than you thought it would be? The research and revision process to meet the editor’s suggestions and recommendations was actually fun. I enjoy the revision process the most when writing a story because I can see how the story, the characters, and the writing itself improve. Marketing and promotion, however, is a different animal, and after over a year, I still struggle with not only how best to market and promote, but fight the frustration with how much time it involves, taking away from actual writing time.

Do you have specific techniques you use to develop the plot and stay on track? I make extensive use of Excel spreadsheets and last year bought a 36x72 inch whiteboard which allows me to brainstorm without restrictions.


How do you overcome writers block? I have never experienced writer’s block in its rawest form – not being able to write anything, because there is always something I can write. If I get stuck while working on a scene or chapter, I either brainstorm a solution to the dilemma or refer to the endless sources of writing prompts. There is always something to write.

What outside influences give you inspiration? I like listening to nature music, playing very softly in the background, Gordon Lightfoot and Enya. During the Christmas holidays, I’ll write on my laptop in the bedroom or family room while tuning the TV to Christmas music. Occasionally I’ll take my laptop to the library to get out of the house, but try to sit where I can occasionally glance out the window and look upon nature.


What tools, programs, processes do you use while writing?
Other than heavy use of Excel, I recently bought Scrivener after giving it a try and attending an on-line presentation. No program or process or tool will ever write a story for me, but the Scrivener software addresses and (so far) resolves the biggest obstacle most writers face – organization.