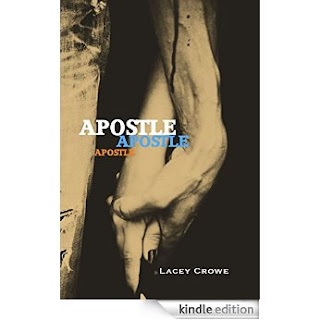 A Haunting Tale of Deranged Love

Apostle is about serial killer Benji and his insatiable desire to kill and "feed his inner monster." When he meets a 16-year-old drifter named Beth, he takes her under his wing, becoming her mentor, teaching her how to harness fear, dominate and kill. Apostle traces Benji and Beth's growing relationship, her want for a deeper connection and what arises from a broken heart.This book made me nostalgic for certain dark comedy's l​ike Natural Born Killers and the 1988 movie Heathers. I found myself both terrified and rooting for Benji and Beth, two serial killers on a killing spree set in Ontario in the early 1970s, specifically in the French River with reference to Sudbury. Somewhere in the middle, I began to loathe Bloody Beth just as I suspect the author Lacey Crowe had planned. ​And while I am a huge fan of mystery and perhaps even some light thriller/suspense. This book was definitely out of my wheelhouse, I wouldn't call it horror but it was very dark and I was skimming ​the cruel cold hearted​ killer Beth had become but then all at once ​the plot shifted and the hunter became the hunted. As a woman, it was excruciating at times to read what Beth was going through as the victim of a psychopath more twisted than herself but it moved fast and I read the book in practically one sitting​. No details were spared and at times I was definitely squirming and yet I was riveted and I couldn't look away.  This story is one of karmic consequence, repentance and self-realization but it is not for the squeamish at heart. Kudos to Author Lacey Crowe who is able to make deranged characters vulnerable and dare I say like-able. 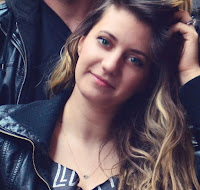 Apostle is available in both ebook and print formats at Amazon.com, Amazon.ca, Amazon.co.uk, Barnes & Noble, Booksamillion.com, Booktopia.com.au, and directly from the publishers' website. 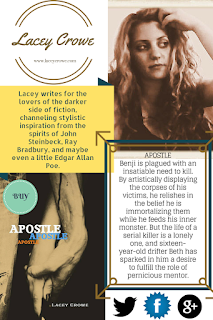 "I awoke to a small beam of light that had bites eaten out of it by the heads Kyle ’s two girls. The kettle still screamed in my ear—the right one. I looked over toward the sound and saw the little girl ’s gaping mouth, teary eyes staring at me, fiercely screaming. staring at me, fiercely screaming. Kyle was leaning over her, undoing the zipper of his the zipper of his pants. The girl was already naked, sitting in her own bloodstains."