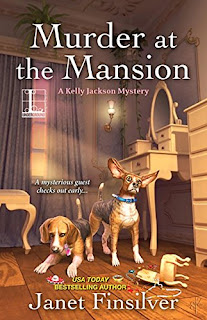 Murder at the Mansion by JANET FINSILVER is the second book in the Kelly Jackson Mystery series. It’s whale-watching season in Redwood Cove, and B&B manager Kelly Jackson’s battening down the hatches for the tourist rush at Redwood Heights—a Victorian-style estate owned by her boss. And due to recent jewelry thefts, her duties include keeping track of the many dust-covered artifacts spread throughout the property. I enjoyed the first book and was pretty pumped to read the second installment. Unfortunately, I was a little underwhelmed by the first quarter of the book. Kelly Jackson's arrival back at Redwood Cove Bed-and-Breakfast is pretty slow. The B and B has been undergoing renovations and is not quite ready to open yet. Kelly’s boss, Michael Carrigan, has her doing inventory of Redwood Heights due to recent thefts. Kelly hears a scream and rushes to find a guest, Sylvia Porter at the bottom of the lobby stairs. Sylvia is upset and insists that someone pushed her, however, Interim Manager Margaret Hensley thinks differently. Apparently, Sylvia has been a demanding guest since her arrival. Later, Kelly is sent to assist on a whale watching tour but returns to the inn early and finds guest Sylvia dead at the dressing table. She begins to question whether or not Sylvia’s death is related to the thefts. Something odd is going on at Redwood Heights, and with the help of her friends, the Silver Sentinels, Kelly sets out to investigate.

I received a complimentary copy of Murder at the Mansion from NetGalley (and the publisher) in exchange for an honest evaluation of the novel.
a Rafflecopter giveaway

To follow the other stops on the tour: http://www.escapewithdollycas.com/great-escapes-virtual-book-tours/books-currently-on-tour/murder-mansion-janet-finsilver/