Adventures of a Bookish Foodie: Cooking for Paranormals is Bloody Hard Business

Several months ago, six authors decided to put together a stew (or is it a roux?) of new paranormal noir novelettes—the spirit of film noir with a paranormal twist. The name of the collection? Dark Secrets.

What does that have to do with food? Well, hey, even faeries have to eat. So here is a three-course meal from some of the authors, paranormal noir style. (Wait, you might say—is that two soup courses? Just roll with it, okay?)

The Appetizer: Faerie Gumbo, by Suzanne Johnson
In my paranormal noir novelette The Consort, the Faerie Winter Princess Tamara and faery-in-hiding Liandra are in New Orleans. The appetizer served in their French Quarter restaurant is gumbo. 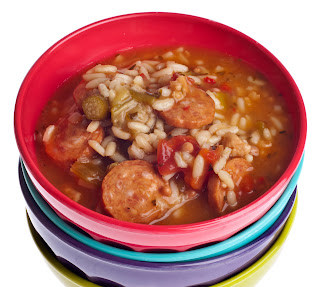 Gumbo is all about the roux. Butter, flour, and water, browned to a dark burnt siena color. Cook it too short a time and it’s bland; cook it too long and it’s bitter. Faeries like their roux just right. Lazy people like the author like the slow-cooker version.

Heat oil to high temperature in a large skillet; add flour and whisk until it turns dark brown (if using butter, note that this happens pretty quickly—don’t overcook). Add onion, celery, green pepper and andouille and cook until vegetables are soft. Add garlic, okra, thyme, bay leaves, cayenne and black pepper and stir another five minutes. Place in a slow-cooker. Top with the chicken pieces, broth, and stewed tomatoes, and cook for 5-6 hours on low. Stir in green onions and adjust salt and pepper to taste. Serve alone or over steamed rice. Serves 6. 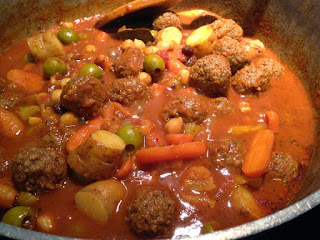 My story in the DARK SECRETS Anthology is The Djinn in the Mirror, which is a paranormal Cinderella story with a young witch as the heroine and a wicked sexy djinn instead of a fairy godmother.
The heroine Dahlia, step-daughter of a power hungry wizard, works as a free housekeeper and cook for her step-father’s commune.  She is used to cooking meals that stretch, and stews are definitely part of her repertoire. Once the story is done with, Dahlia reclaims the house as her rightful inheritance and works with her heroic djinn Ashmael to turn it back into a working ranch and farm. Since she has a soft spot for Ash, it’s a given that she’d make a special stew for him reminiscent of his childhood. I’d imagine Moroccan flavors and spices would be pretty close to what he grew up eating.
Of course, Dahlia wouldn’t use frozen meatballs, but for myself and for most modern readers, I think convenience is a big plus. Additionally, my kids will eat anything with meatballs.
Personally I love this stew because the house smells amazing while it’s cooking and in the end you have a warm and comforting meal. As a food writer (my official day job), I try to come up with recipes which are healthy, interesting, and satisfying. I hope y’all enjoy the stew as much as my family does!

Serve over Brown Rice or Couscous with fresh chopped Cilantro and Lemon wedges to squeeze.

Directions:
1. Heat oil in a large pot or a dutch oven.
2. Add whole spices (cinnamon to peppercorns) and cook for about 2 minutes.
3. Add chopped onions, potatoes and carrots and cook until onions are softened.
4. Add in ground spices (turmeric to cumin), cook using bits of broth to keep the spices from sticking (but don't too much liquid at a time because you want to cook the rawness out of the spices)
5. When the spices look cooked, add in remaining broth, meatballs, jalapeno, tomatoes and chickpeas or garbanzos and apricots. Bring to a boil, lower heat and simmer for about 15 to 20 minutes. (Potatoes and carrots should be tender by the end of it)
6. Add in olives and spinach, stir, Add salt to taste. Take off heat and top with fresh cilantro and green onions. Stir before serving over rice or couscous. 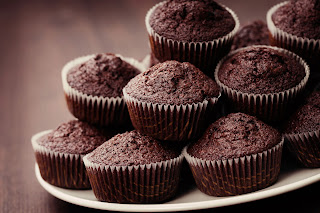 From her paranormal noir novella, Dance with the Devil….because the devil loves him some chocolate!

Bake in preheated oven until a toothpick inserted into the center comes out clean, about 20 minutes. Cool in the pans for 10 minutes before removing to cool completely on a wire rack.

And there you have it—a perfectly paranormal noir meal just in time for fall!

For this blog tour stop, we’re giving away one $10 Amazon Gift Card. Enter using the 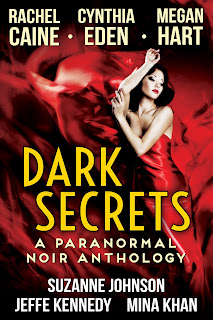 Six award-winning authors bring you this spellbinding collection of stories about dark desires, mysterious worlds, and danger that lurks in the shadows of the night. Where nothing is black and white; where things might not be as they seem; where magic and mayhem rule.

Valentine is a detective with two major problems: he's been offered a kidnapping case that will probably get him killed, and his partner won't let him turn it down. He owes her that much … since his partner's a ghost, and he's the one who killed her. A dark, haunting noir mystery of love, hate and loss.

PI Mick Swayne has seen it all—his clients have included liars, thieves, and even killers. He thinks he can handle anything and anyone. Then she walks into his office. Savannah Moreau is beautiful, seductive, and…a vampire? The gorgeous vamp hires Mick to help her track down a killer who is hunting in Chicago, but as Mick slips deeper into Savannah’s paranormal world, he wonders if he can really trust his new client…

DANCE WITH THE DEVIL by Megan Hart

When the devil starts the music, you'd better get ready to dance.

Kathleen Murphy has sold her soul to the devil. Fame, fortune, success...everything she's ever dreamed of is hers, and all she has to do is the devil's bidding. When love comes knocking, the last thing in the world she wants to do is involve Jake in her twisted world, but the devil's started up the jukebox and Kathleen has no choice but to learn the steps.

THE CONSORT by Suzanne Johnson

Faulkner Hearne, the captain of the ruthless Fae Hunters, finds his duty at odds with his heart when he’s ordered to capture the consort of Faerie’s cruel Prince of Summer when she flees across the veil into modern New Orleans. Can Faulk turn Liandra over to a certain death at the hands of the prince, or will he risk a war with Faerie in order to save her? An all-new novella set in the Sentinels of New Orleans multiverse.

A dark fairytale retelling of a princess robbed of rank, husband and even her name.
Nix is nothing. The Princess Natilde—her former waiting woman—attacked her on the journey to wed Prince Cavan, stripping her of everything and taking her place. With no serving skills, Nix becomes a goose girl. Perhaps if Nix keeps her promise never to reveal who she really is, Natilde won’t carry out her vile threats. Prince Cavan entered his arranged marriage determined to have a congenial, if not loving relationship with his future queen—for the sake of both their kingdoms. But, his wife repels him more each day and he finds himself absurdly drawn to the lovely Nix....With broken vows, anguish and dark secrets between them, Cavan and Nix struggle to find the magic to restore what’s gone terribly wrong... if it ever can be.

THE DJINN IN THE MIRROR by Mina Khan, a Djinn World novella

A paranormal Cinderella story with a young witch as the heroine and a wicked, sexy djinn instead of a fairy godmother....Dahlia, the step-daughter of a power hungry wizard, promises to free a djinn trapped in a mirror if he rescues her from impending death. But Ashmael the djinn has his own agenda: to trick & seduce his way to freedom. The only problem is he ends up falling for Dahlia. Can he win his freedom and save the girl?

Award-winning author Cynthia Eden writes dark tales of paranormal romance and romantic suspense. She is a New York Times, USA Today, Digital Book World, and IndieReader best-seller. Cynthia is also a three-time finalist for the prestigious RITA® award. Since she began writing full-time in 2005, Cynthia has written over fifty novels and novellas.

Award-winning author Mina Khan grew up in Bangladesh on stories of djinns, ghosts and monsters. These childhood fancies now color her fiction. She daydreams of hunky paranormal heroes, magic, mayhem and mischief and writes them down as stories. She is the author of the Djinn World Chronicles, including The Djinn’s Dilemma and A Tale of Two Djinns, as well as Wildfire, a paranormal mystery with cowboys and dragons.